Chairman of the SEC 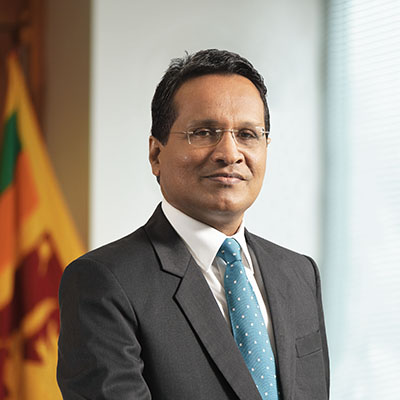 Mr. Viraj Dayaratne, President’s Counsel, assumed office as the Chairman of the SEC on 22
January 2020. Mr. Dayaratne, holds a Bachelor of Arts Degree in International Relations (BA)
from the University of Colombo and a Masters Degree in International Trade Law (LL.M) from
the University of Wales. He entered the Sri Lanka Law College in 1989 and was admitted and
enrolled as an Attorney –at- Law of the Supreme Court of Sri Lanka in November 1992.

He joined the Attorney General’s Department of Sri Lanka as a State Counsel in January 1993 and rose to become Additional Solicitor General in May 2018. He was appointed as a President’s Counsel by His Excellency the President in June the same year.

During the first six years of his career at the Attorney General’s Department, Mr.Dayaratne was attached to the Criminal Division and conducted prosecutions in the Magistrate’s Courts and the High Courts and also appeared for the State in the Court of Appeal in appeals filed against judgments delivered by the High Courts. Thereafter, he moved to the Civil and Commercial Law Division and has represented the State, State Corporations and other Statutory Institutions in the original as well as the appellate courts and these involved amongst others, matters pertaining to fundamental rights, public law, commercial law, tax, banking, customs and labour law. He has also appeared in several commercial arbitrations both in Sri Lanka and abroad. His work also included advising the Government, State Corporations and other Statutory Institutions on diverse legal issues. Mr. Dayaratne is a visiting Judge of the Court of Appeal of the Republic of Fiji and an Adjudicator of the Panel of Adjudicators of the Asian International Arbitration Centre (AIAC) in Malaysia. He is also a member of the Faculty Board of the ICLP Arbitration Centre and functions as a visiting Lecturer in Construction Arbitration and Adjudication. He was a visiting Lecturer and Examiner in the Law of Arbitration and an Examiner in Administrative Law at the Sri Lanka Law College and also served as a visiting Lecturer in the Law of Contracts for the LLB London Degree Course conducted by the Informatics Institute of Technology. Mr. Dayaratne served as a Legal Expert at the Directorate of Contracts and Legal Affairs of the Ministry of Defense of the Sultanate of Oman for a period of two years from 2009 to 2011. He also functioned as a Legal Consultant to the Public Enterprises Reform Commission of Sri Lanka (PERC) as well as the Commission to Investigate Allegations of Bribery and Corruption. He also functioned as Judge Advocate General of the Sri Lanka Air Force. He has been a member of various project committees and amongst them were the Project Committees that drafted the Project Agreements in respect of the Mahaweli Mini Hydro Power Project on a BOO / BOOT basis and the Kilinochchi District Electrification Project on a BOO basis and was a member of the Sri Lanka government delegation that negotiated the Bilateral Investment Agreement between Sri Lanka and Oman. He has represented the government at many international conferences and has contributed articles on varied subjects of the law to many publications. The Public Service Commission (PSC) released him from the Attorney General’s Department to take up duties as Chairman of the SEC.

“The main thrust of the work undertaken during the past year has been aimed at addressing regulatory gaps and coverage, adopting appropriate risk mitigation measures, strengthening the supervision of intermediaries and enhancing financial literacy.”

It is my pleasure to present my first Annual Report as the Chairman of the Securities and Exchange Commission of Sri Lanka (SEC). Capital markets represent an important source of financing for businesses to meet their funding requirements and better wealth creating opportunities for investors. Taking into consideration the important role played by the capital market, the SEC is required to ensure that appropriate regulations are in place to meet the demands of both businesses and investors. Therefore, while we remain steadfast in our commitment to delivering on our mandate, we intend to strike a balance between ensuring strong investor protection and providing the flexibility required to maintain a thriving capital market.

In this review, I take the opportunity to both reflect on the main areas which defined our work in 2019 and present our vision for the coming years. The   main   thrust   of the work undertaken during the past year has been aimed at addressing regulatory gaps and coverage, adopting appropriate risk mitigation measures, strengthening the supervision of intermediaries and enhancing financial literacy. Firstly, let me highlight a few of our key achievements in 2019.

We believe that regulation is necessary to strengthen and ensure the integrity of the capital market and not stand in the way of its development. To that end, promulgation of the new Securities Exchange Act was considered as a priority in order to provide a better and more efficacious regulatory framework in line with international best practices. Considerable work has gone into drafting the new Act and it contains many salutary provisions. The draft law seeks to achieve improved governance standards, provide for the establishment of a clearing house acting as a central counterparty (CCP), make provision for the  regulation of a demutualised exchange, recognize new categories of market intermediaries and introduce a wide range of enforcement mechanisms to deal with market misconduct.

It was not possible to have the draft Act taken up for debate in Parliament although it had been tabled in Parliament and in view of the dissolution of Parliament, the process of introducing the draft Act in the new Parliament will have to commence after the General Elections. In preparation for this, the new Commission is presently engaged in the process of reviewing the provisions contained therein. The SEC is confident that the Government will take steps to have it enacted early enabling balanced, effective and proportionate regulation.

The SEC continued to adopt a risk-focused approach to supervise regulated entities and identify, monitor and contain risk with special focus on financial soundness and business efficacy. Given the potential money laundering and terrorist financing risks posed to the securities sector in Sri Lanka, we conducted guidance and awareness sessions for our regulated entities aimed at strengthening the industry’s understanding of the Anti-Money Laundering and Countering the Financing of Terrorism (AML/CFT) regulations. During the year, based on high risk areas

identified by the Risk Assessment Questionnaire and the supervision framework for stock broking companies, we conducted onsite supervision focusing on AML/CFT risks.

We are currently exploring the possibility of expanding digitalized reporting and regulatory processes further, in order to ensure regulatory reporting more accurate, efficient, and consistent.

It is imperative that investors have a proper understanding of Sri Lanka’s capital market before they venture to invest if  they are to appreciate the benefits and the risks of making such investments. The SEC continued with its nationwide investor awareness programs through a multi-pronged engagement strategy in the form of workshops as well as print and electronic media campaigns. We engaged over 10,000 participants through our trilingual outreach programs. The SEC continued to honour the agreement which was entered into with the Ministry of Education and commenced a provincial television quiz program for Advanced Level students in the Commerce and Economics streams. To coincide with the World Investor Week organized by the International Organization of Securities Commissions, the SEC published a number of public awareness messages in the form of educational cartoons, notices, articles etc in all three languages. They focused on the need for sound personal financial planning.

For capital markets to be inclusive, it is imperative that Small and Medium Scale Enterprises (SMEs) are able to obtain market-based financing. Hence, the SEC together with the Colombo Stock Exchange (CSE) launched the “Empower Board” to create a platform for SMEs to list. To generate greater awareness of capital raising through this listing platform, the SEC along with the CSE and regional Chambers conducted awareness programs targeting SMEs and other entrepreneurs. More than 500 participants attended these programs and engaged with the speakers, panelists and investment banks.

Since SMEs constitute the backbone of the Sri Lankan economy with a contribution of over 50% to the Gross Domestic Product and generating a high level of socio-economic benefits, we are committed to facilitate financing for such enterprises through the capital market.

We are mindful that engagement with our stakeholders is necessary to facilitate the discharge of the SEC’s responsibilities. During 2019, we regularly had consultations with industry participants, especially listed companies, auditors, stockbrokers and unit trust management companies in order to discuss and gather feedback on issues regarding policy and regulatory matters. Since we received valuable inputs through this dialogue, we will ensure that steps are taken to further strengthen our relationship with them. This will not only help formulate major capital market policies and streamline the regulatory regime but also understand and appreciate the respective professional roles and responsibilities.

The new Commission that was appointed in January 2020 commenced a series of meetings with industry stakeholders and obtained their views on developing the capital market as well as listened to the difficulties faced by them. These deliberations brought out some valuable suggestions and insights to develop infrastructure, strengthen and simplify market regulation, develop new products and enhance awareness for both investors and issuers. We expect to appoint joint committees of the SEC and the CSE to look into and make recommendations to address these challenges expeditiously.

Moreover, to promote agility and operational efficiency in the capital market, the SEC along with the CSE will take steps to offer investors a fully digital onboarding experience, enable seamless post-trade and settlement and adopt e-contract notes and e-statements. The process of reviewing and amending the Stockbroker Rules, Central Depository Systems Rules and Listing Rules is already underway to drive innovation and greater capital market development.

I would like to conclude by thanking all Commission members for sharing their expertise, and experience and spending their valuable time in the performance of the work of the SEC.  I also wish to express my deep appreciation of the cooperation and unstinted support and the hard work of the Director General and staff of the Secretariat. Finally, I wish to thank Hon. Prime Minister Mahinda Rajapaksa, who in the capacity of the Minister of Finance is our line Minister, Mr. S.R. Attygalle, Secretary to the Treasury, officials of the Ministry of Finance and all our stakeholders for the support extended for the smooth functioning of the Commission.